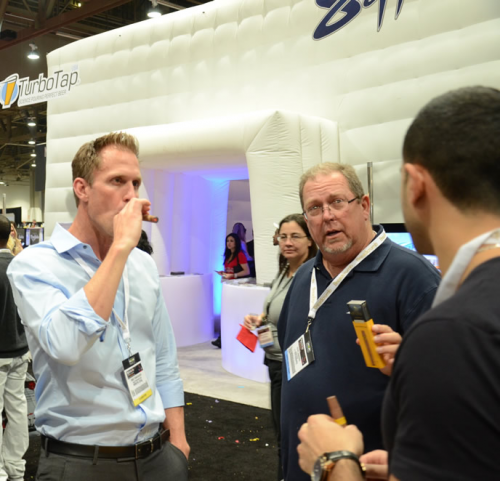 EPUFFER made astonishing discoveries when attending the nightclub and bar trade show, situated next to Sapphire, their eyes were truly opened.

Last month, EPUFFER took their revolutionary new way to smoke to the nightclub and bar trade show in Vegas. Already heralded as a wicked invention at the Oscars and favored as a sweet smelling smoke at the Golden Globes, EPUFFER thought they were prepared for what would happen next.

Their stand was nestled snugly against Sapphire, the largest gentlemen's club in the world, which EPUFFER agree played a part in their astonishing success.

As entrepreneurs and journalists wandered around the show trying the alcoholic cocktails on offer, their attention inevitably lead to the glamorous booth of Sapphire which sported many sensual half naked girls. After a feast for the eyes and suitably lubricated with alcohol, they moved onto EPUFFER for a health conscious cigar to accompany them round the rest of the show.

In fact the electronic cigars ( in particular the Disposable E-CIGAR ) were so popular due to the price, flavor, the ease of use, the craving killer and the super sexy appearance that EPUFFER sold out in just four hours with two days left to go!

eople adored being able to linger for longer as they smoked the EPUFFER indoors, enjoying the combination of electronic cigarettes and alcohol without producing damaging smoke.

Now many bars, clubs and restaurants have signed up to use EPUFFERS in their own establishments as they saw first-hand how this way to smoke brought more people to their place. These, and any other, who sign up will benefit from a listing on the EPUFFER website so clubbers and diners know where they can go and enjoy an EPUFFER cigar indoors.